Copper: A Testament to Durability

While most metals corrode and break down with the passage of time, copper is highly corrosion-resistant. The strength of copper can be clearly witnessed in comparison to steel. In an experiment undertaken to learn the durability of cooper versus steel, a 1mm thick plate of both metals were placed in water. The results showed it would take 197 years for copper to corrode while the steel plate developed a hole after six years.

Other examples of copper's durability include:

Of all the metal in the world, next to gold and silver, copper can be forged the broadest, thinnest, and longest. Copper plates, 0.03mm thinner than paper, are used in circuit boards of a wide range of electronic goods. Because of the superb ductility of copper, it is used as a material for ammunition cartridge cases and cannonballs. Copper can also be welded into all kinds of metals except aluminum. Copper is the best material for making cast products. Statues, faucets or other types of valves, door locks and other common, daily goods are made of this remarkable metal.

Copper is generally divided into pure copper and copper alloy. Pure copper is commercialized and used as a material to make copper alloy. Copper alloys, meanwhile, are produced for special purposes since their mechanical and physical properties can be controlled.

The materials used in aircraft or rockets are required to be lightweight, but heat-resistant. In such cases, the metals with the properties that best meet the requirements are used. If such materials cannot be found, however, a new alloy must be developed. In fact, it is possible to produce an alloy that mixes the best properties from all metals.

Thermal conductivity generally based on the amount of heat required to raise the unit weight body temperature by one degree. Copper has great thermal conductivity, nine times that of steel and 24 times better than stainless steel. Therefore, it is the most suitable material when manufacturing heating pipes, pipes for boilers, or heat exchanges. 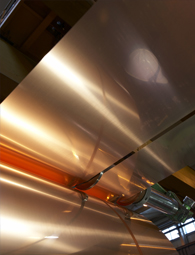